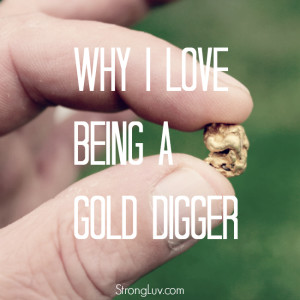 I think the term “gold digger” has gotten a bad rap.  Songs have been written and movies have been made (Hey Kanye!).  The term is generally used to describe someone who cozies up to another person just to siphon off what resources they have.  The most common narrative is the pretty girl who goes after the yucky rich guy just for his money.

I think we should redefine the term though.  Redeem it even.  I am a gold digger.

At least I strive to be, but not for the reasons you might think.

I would apply the term to our son’s school counselor who passed away recently, and I would mean it as a sincere compliment.  Mr. Mike had the uncanny ability to see the gold in someone and knew just how to pull it out of them.  It was a gift.  Instead of spending his life in the Klondike though, he mined for treasure in every conversation and encounter.

After spending time with him you felt understood and appreciated in a way that rarely happens in life.  It’s like he saw the person you were created to be regardless of the challenges you were facing.  He wasn’t dissuaded by your past mistakes or current struggles.  Instead, he spent his energy shining a spotlight on your budding virtues and unique gifts — no matter how underdeveloped they were.

He made you believe in yourself again.  He reminded you of your unmatched value.  And he changed lives.

I want to be like that.  I want US to be like that.  Human treasure hunters who spend our time and resources digging deep and discovering the best in people.  Those who use our words to wash away the grime and dirt and lies that have hidden the reserve of riches within them.

It takes significantly less effort to point out the flaws in someone, but anyone can do that.  Let’s be the kind of people who dig for the good stuff and discover what’s really valuable!

TAKE ACTION:  Make it your mission to search for the value in at least one person you interact with today.  Show genuine care and concern and dig a little deeper than you normally would.  Encourage them with the greatness you see in them.

Previous Post: « Teaching Children to Ask for Forgiveness: 4 Guidelines to a Great Apology
Next Post: How to Make Soothing Lavender Bath Salts – The Perfect Gift for Mother’s Day »